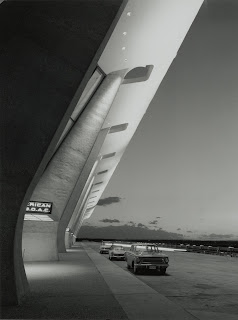 Eero Saarinen’s future was, sadly, cut short. The modernist architect and designer of some of the most recognizable mid-century modern furniture designs (think Tulip chair) passed away at the age of 51 from a brain tumor. In his short life, Saarinen, who immigrated to the United States from Finland in 1923 when he was 13, designed some of the most iconic examples of American architecture: the St. Louis Arch, the main terminal at Dulles (seen at left circa 1963) and the former TWA terminal at JFK airport.

Beginning tomorrow and running until Aug. 23, the National Building Museum will present Eero Saarinen: Shaping the Future, the first retrospective of Saarinen’s career. The exhibition will feature full-scale building models, never-before seen drawings, furniture, photographs, films, and other artifacts. The exhibit marks the first public unveiling of the architect’s complete archives–the largest repository of Saarinen-related material in the world–which was donated to Yale University in 2002. 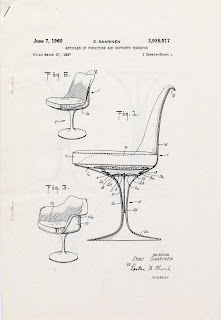 Saarinen’s “untimely death—coupled with the extraordinary diversity of his work–made Saarinen a problematic figure for critics and historians, and as a result, the architect’s many contributions were widely overlooked for much of the past four decades,” the museum says in announcing the exhibit, which “makes a powerful case for recognizing Saarinen as an exceptionally innovative figure whose work has exerted a profound and continuous influence on architectural theory and practice for more than a half-century.”

If you feel inspired to buy something by Saarinen, you’re in luck. Knoll is having its annual sale from May 2 to 11. It’s only 10 percent off, so I hope you have been saving up.