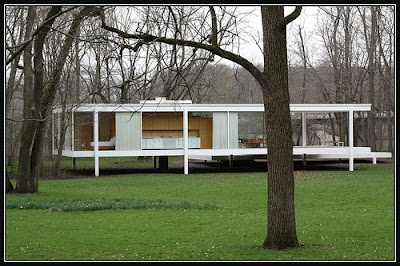 Photo by tinyfroglet
The Wall Street Journal has a piece on some of the issues those living in glass houses deal with (faded furniture and pecking turkeys to name a few) that did not come up in the discussion here. The story also talks about the high-profile lawsuit involving one of the most famous glass houses, the Farnsworth House by Mies Van de Rohe (pictured above):
“Complaints about glass houses date to some of the earliest examples. After architect Ludwig Mies van der Rohe completed his iconic Plano, Ill., Modernist house in 1951, the owner, Edith Farnsworth, started grumbling. Illuminated at night, the elevated glass box became a magnet for bugs. During the summer, ‘the sun turned the interior into a cooker,’ writes Mies biographer Franz Schulze. Dr. Farnsworth sued the architect, in part over cost overruns but also because she contended that the house was unlivable. She ultimately lost her petition to rescind the added expenses, but her gripes were aired widely and resulted in a small backlash against Modernist architecture.”
The article, however, ends on a more positive note, saying “most people who live in glass-walled homes insist they wouldn’t trade their views. Standing in his Manhattan living room overlooking the Hudson, Raj Mahajan says, “It brings a little bit of nonconcrete serenity to my New York existence.”