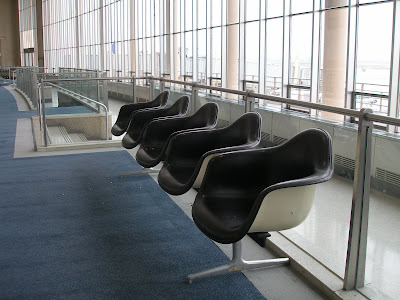 Before striking out on his own to design modern homes, Charles Goodman was a government architect. He designed post offices and other federal buildings. In 1939, he was selected to be the government’s architect to help design National Airport. While Goodman would eventually resign amid bureaucratic meddling in his vision for the airport, elements of Goodman design were retained, including the sweeping lobby of Historic Terminal A, as it is called. The terminal, which opened in 1941, has a massive, slightly curving wall of windows perfect for viewing the planes taking off and landing. The terminal is currently undergoing renovations “to restore the terminal to its 1941 design and architecture,” according to the Metropolitan Washington Airports Authority. I took this quick shot of the vintage Eames chairs as my family and I were rushing to catch a recent flight to Florida.

Saarinen Retrospective: Shaping the Future at the National Building Musuem;...Saarinen: The First ‘Starchitect’?
Scroll to top