You are here: Home1 / Blog2 / Mid-Century Modern3 / Modern Change We Can Believe In? 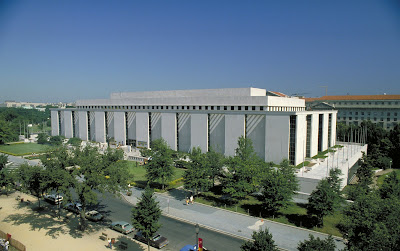 The National Museum of American History before renovations.
(Photo of courtesy of the Smithsonian)
The Washington Post’s Phillip Kennicott takes a look at the renovated National Museum of American History (originally the Museum of History and Technology) and does not entirely like what he sees. Opened in 1964 and designed by the successor firm to McKim, Mead & White, which was known for its Beaux-Arts architecture at the turn of the 20th century, not for modern designs.

“The original architects were trying to solve what has proved an intractable problem,” Kennicott writes. “How do you be modern and classical at the same time? Their solution was a perfect Washington non-answer. Be a little of both, say nothing too definite, hem and haw and split the difference. So the museum has classical proportions, but the blank, sleek face of modern style. It is punctuated by long, vertical lines that may define wide ‘columns,’ or may just be long vertical window openings.”

One of the major changes–the creation of an large atrium and skylight to open the space and allow for more light, was done by the architects of Skidmore, Owings & Merrill, which I obsess about here.

Kennicott says SOM has been “faithful to the building’s old materials, keeping the white and black marble paneling that defines, respectively, the museum’s East and West wings. Greenish terrazzo flooring recalls the very 1960s palette and textures of the old space. The lighting, though preternaturally brighter in the central core, echoes the hospital-style lighting of the old wings.”

Kennicott admires the effort to hew to the original design, but in the end, thinks that is the problem.

“Anyone who grew up in the era when 1960s institutional architecture was new or considered fresh will feel a dreary sense of emptiness, even with the architecture’s newer, brighter, more open form. The bareness of the finish and the materials–the gray speckled flooring, the ‘dirty’ marble panels, the airport seating in the wings–which have been faithfully preserved or echoed, were the look of the future when they were new. It was a look in argument of the battered old feel of Main Street, but it made banks feel like department stores and junior high schools feel like hospitals. … It was almost as if architects of that period imagined that the future was itself a place, a home, that would replace our old, rooted, particular sense of home. But that future turned out to be merely a style, and its worst exemplars–bland and uninspired buildings like this one–feel awfully bleak today. No wonder so many of the historic objects feel homeless in this museum, while the machines–the true icons of the ideology behind this building’s look–seem to be at ease no matter where they are placed.”

I have not been yet, so I can’t really add my two cents. Have others visited? What do you think?

Two 1978 Contemporaries in Fairfax County Can an ‘Eyesore’ Be Significant?
Scroll to top