You are here: Home1 / Blog2 / Mid-Century Modern3 / Modern Capital Contest: Name the 12 Architects Who Have Appeared on the... 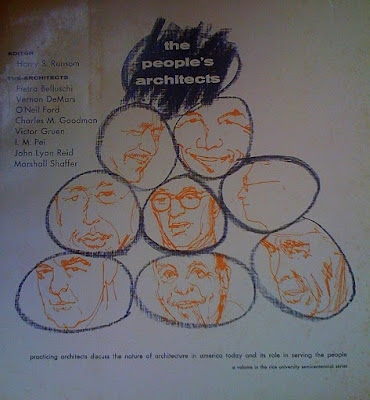 Charles Goodman is pictured at bottom right.
Congrats to Karl in Silver Spring for being the first to answer the question posed below correctly. These are the names I was looking for:

Karl made two good points: Charles Luckman could also be included in this list, although he appeared on the cover for his business career as president of Lever Brothers, not for his later work as an architect. Karl also mentioned Thomas Jefferson as a “bonus.” Thanks to all who played.

—————————————————————————–
In my previous post, I mentioned the March 31, 1958, Time cover featuring Edward Durrell Stone. The first person who e-mails me with the names of the 12 architects who have appeared on the cover of Time will win a copy of the 1964 book, The People’s Architects. Published by Rice University, the book features an essay, “Architecture and Society,” by Charles Goodman, who, no, is not one of the architects to appear on the cover of Time.
Please include your full name and address so I can mail the book. Good luck.

Event: Lost River Modern at DWR in Georgetown; 10/24 Preview of Visual Acoustics: The Modernism of Julius Shulman
Scroll to top