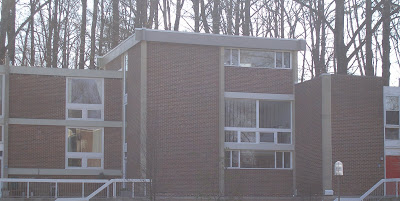 Townhomes by Charles Goodman in Hickory Cluster in Reston, Virginia


I came across an interesting article (scroll down a bit after you hit the link) from 1966 on the new phenomenon of suburban townhomes by then-Washington Post architecture critic Wolf Von Eckardt. In his article, Von Eckardt writes how developers repackaged the old row house concept of the cities into the modern townhomes of the suburbs. He hailed this move not only for the modern architecture, which he thought was more compelling than most suburban homes, but for their “green” attributes (he did not describe these as green, but that is essentially what he was saying 40 years before it was hip): townhouses minimize suburban sprawl by using less land, they take less resources to build, etc.

“When the row house became a town house, a number of creative, modern architects came to the rescue,” Von Eckhardt wrote. “They have contributed little to our suburban housing, partly because it doesn’t pay them and partly because the builders feel they can along without them. But for the town house the builders have sought professional help.” Von Eckardt highlighted the work of prominent architects in the new modern suburban town of Reston, including Charles Goodman, Chloethiel Woodard Smith and Louis Sauer, who was schooled at the Institute of Design at Illinois Institute of Technology founded by Bauhaus master Lazlo Moholy-Nagy.

Below are a few homes for sale, one by Goodman and two by Sauer.