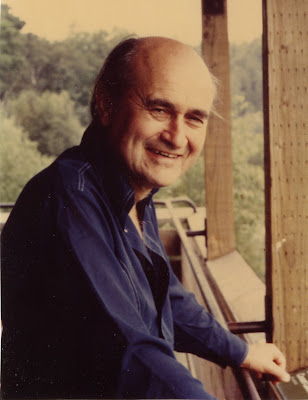 During the late forties through the mid-fifties, Mr. Smull was active in the contemporary architecture movement, designing homes throughout the Washington area (including this one), as well as commercial interior design for such local establishments as Sidney Kramer’s original bookstore. He also designed the FHA development, Glassmanor, in Prince George’s County and other tract subdivisions, totally nearly 10,000 units. For a time, he was a partner of Leon Brown, FAIA. His design aesthetic produced simple, functional homes that harmonized with their natural environment.

Mr. Smull, who was known as “Billy,” was born in New York City in 1923. His father, Josef Smul, left Austria as a teenager, worked his way through medical school as a waiter and a tailor, and was a practicing physician for over 60 years. His mother, Ethel Lubell Smul, was an artist and an art teacher. Mr. Smull was groomed for medical school but his medical studies at Columbia University did not go well. After graduating from Columbia, he went to Catholic University to study architecture, taking time off for a Fellowship at the Harvard School of Design. While living in Washington, Mr. Smull taught at the Institute of Contemporary Arts and Howard University, and later, in New York, at Pratt Institute. He wrote architectural commentary for Progressive Architecture.

In 1954, Mr. Smull moved back to New York and worked for several architectural firms including Michael Saphier Associates and Herman Miller. He went on to establishing his own firm on Madison Avenue, where, in addition to residential and commercial building design, he became interested in interior space utilization and specialized in redesigning stock brokerage houses, men’s haberdasheries and showrooms, and civic buildings. His clients included Bache and Company, Stanley Blacker, Cinerama, and Barton’s Candy.

Survivors include two children, Tony Smull, of Washington, and Julia Lennen, of Silver Spring; his sister, Kathryn Arnow, of Washington; and one grandson.