The D.C. Preservation League is holding a trio of modern-related events in the coming months. The League’s DC Modern Fall 2008 programming kicks off this Saturday (Oct. 4) with a walking tour, “Southwest DC: Renewal at Risk,” which will focus on the area’s urban renewal projects from the 1950s and ’60s and is being cosponsored by the preservation organization DOCOMOMO. A reception before the tour will held at the Thomas Law House and is sponsored by the Keyes, Lethbridge and Condon-designed Tiber Island Cooperative Homes, one of the developments built as part of the urban renewal. Tickets are $20 for non-members, $10 for members.

The second event ($20 for non-members; $10 for members) will focus on the designation and future preservation of modern buildings and sites within Washington. The panel discussion, “Evaluating the Significance of Modern Structures,” will be held on Nov. 20 in one of my favorite MCM buildings in D.C., the 1965 Pan American Health Organization building (see below) by Uruguayan architect Roman Fresnedo Siri. The building is located at 525 23rd St., NW. I’ll have a more on this building in an upcoming post. 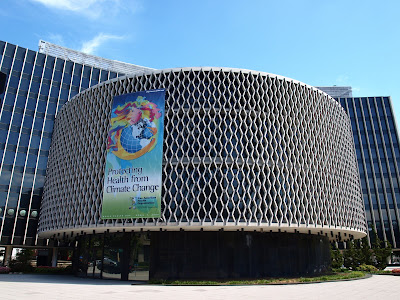 The third event, originally scheduled for Oct. 15 at the Mies van der Rohe-designed MLK Library has been postponed until February 2009. The event will focus on a recent study cataloguing mid-century modern buildings in Washington and the importance of modernism to the development of the city.

Make sure to click here for all the details and registration form.