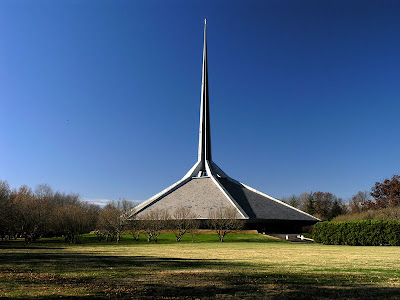 I saw that this Sunday’s Washington Post is going to highlight the modern mecca of Columbus, Indiana. I thought I would beat them to the punch. You’re thinking Columbus, Indiana? For those who went to the Eero Saarinen visit at the National Building Museum, you saw a number of Saarinen’s works in Columbus highlighted, including the Miller House, Irwin Union Bank and the North Christian Church, Saarinen’s last building (pictured above).

So why was Saarinen designing homes and buildings in a small town in Indiana. Why does the town have “more buildings per capita designed by winners of the profession’s highest award — the Pritzker Architecture Prize — than any city on Earth,” as former Post architecture critic Benjamin Forgey wrote in a 2004 obituary of J. Irwin Miller, the force behind the creation of the modern enclave in middle America.

Miller, the the longtime head of Cummins Engine Co., went to Yale with Saarinen in the 1920s. In the post-war years, a foundation ran by Miller agreed to pay the architects’ fees of newly designed schools, but they had to come from the foundation’s list of architects. “This explains why major-league architects such as [Harry] Weese [think Metro, Arena Stage], [Richard] Meier, the Architects Collaborative, Edward Larrabee Barnes, Gunnar Birkerts, Eliot Noyes, Romaldo Giurgola and Hardy Holzman Pfeiffer have designed school buildings in minor-league Columbus,” Forgey wrote. The program was later expanded to other buildings in the town located 40 miles south of Indianapolis and 600 miles from D.C. Six buildings are designated on the National Register of Historic Places.

I’ve never been to Indiana. I think it’s time to go.

A Tour of SouthwestModern Baltimore?
Scroll to top