If you have been thinking about checking out Carderock Springs in Bethesda, now may be a good time to look. Here are eight houses for sale in the community; six of them are open today. Carderock, built by Edmund Bennett and designed by the MCM architecture team of Keyes, Lethbridge and Condon, was named earlier this year to the National Register of Historic Places.

Post columnist Roger K. Lewis, a practicing architect and a professor emeritus of architecture at the University of Maryland, gives some of the history of brutalist architecture and tells preservationists not to worry too much over the Third Church of Christ decision.

“[P]reservationists should not panic,” he writes in today’s column. “This was a special case involving tough issues: private property rights, freedom of worship, economic hardship, a structure difficult to adapt to new uses, and, conversely, the government’s right and duty to advocate for and enforce historic preservation.

Thus the church’s fate is not a harbinger of things to come. The need to act sustainably and create greener architecture will ensure survival of most unloved concrete buildings, preserving the energy and resources already invested in them. And with a creative facade makeover, even the brutal can be made beautiful.”

The D.C. Preservation League is will announce its 2009 list of most Endangered Places on June 2 at 12:30 p.m. See full details here. I wonder if there will be any MCM buildings on the list this year? Last year, the brutalist Third Church of Christ, Scientist correctly made the list. The city has now has given the green light for it to be razed.

While the DCPL is looking at its legal options concerning the decision on the church, which was previously designated a historic landmark by the District, it will hold a symposium, Third Church: A Hard Building to Love, June 2o from 10:00 a.m. – 12:30 p.m. at the offices of the American Institute of Architects. (The program is free, but registration is required. See full details here.)

The symposium will feature nationally recognized architects Hugh Newell Jacobsen and Arthur Cotton Moore along with other leading experts who will “discuss key strategies for successfully adapting this controversial mid-century modernist landmark for contemporary use and how these strategies can serve as a prototype for similar buildings.” 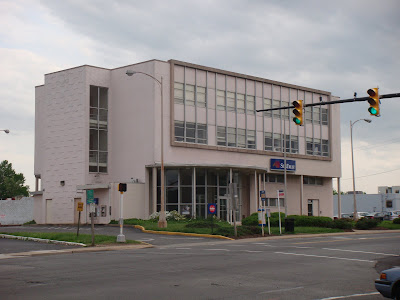 Submitted by Robyn in Arlington, this early 1960s building at 3018 Columbia Pike in Arlington was originally built as First Federal Savings and Loan Association of Arlington and dedicated February 28, 1962. It was originally a light, mint-green colored brick.  C’mon SunTrust, bring back that funky green.

Do you have a favorite MCM building or space in your neighborhood? E-mail me pics and any info you have so I can feature in a future Modern Snapshot.
https://www.moderncapitaldc.com/wp-content/uploads/2019/11/modern-capital-logo.png 0 0 Mid-Century Mike https://www.moderncapitaldc.com/wp-content/uploads/2019/11/modern-capital-logo.png Mid-Century Mike2009-05-21 16:51:002009-05-21 16:51:00Modern Snapshot: Mid-Century Bank in Arlington

The Post‘s architecture critic Philip Kennicott takes a look at the National Trust for Historic Preservation’s List of Most Endangered Historic Places, saying the list does not always pick “easy” choices and comments on the Third Church of Christ debate. (According to this AP story, “Rebecca Miller, executive director of the D.C. Preservation League, said there are unexplored alternatives that would maintain the historic building. The group will likely appeal the decision, she said.”)

On the Trust’s list and the larger issue of preservation, Kennicott writes:

“[T]he National Trust’s annual list — which reflects increasing concern about the preservation of mid-century modernism — has never been exclusively devoted to the easy issues in preservation. When they hold their yearly adopt-a-puppy day, they don’t slight the mutts, the mangy and the ill-tempered. The list is always way out ahead of public opinion, which is where the Trust should be. And it often serves more as a guide to the philosophical problems of preservation than a simple gazetteer of historic or beloved buildings.

“This year, there’s nothing local on the list. But that doesn’t mean the list doesn’t have clear local import. Frank Lloyd Wright’s Unity Temple in Oak Park, Ill., is a far greater and more essential building than Araldo Cossutta’s 1971 Third Church of Christ, Scientist, on 16th Street near the White House. And the Unitarian Universalist congregants of the Wright’s 1909 temple are desperate to save their house of worship, while the Christian Scientists who worship in Cossutta’s concrete box have successfully appealed to the city to bypass a 2007 historic landmark designation so that it can be demolished and replaced with something more congenial.

“But it is the dilemma of the congregations that reminds us how often people and groups who never signed up to be preservationists are thrust into the role. Schools, churches, hospitals all have primary purposes that make it awkward and sometimes impossible for them to be stewards of historic structures.”

“The Christian Science Church got the OK to raze its 1970s-era concrete chapel and can now proceed with development plans, apparently ending one of the city’s fiercest battles over historic preservation,” the Washington Business Journal reports. Read the full article here. Is this really the end of this long-simmering battle? Post columnist Mark Fisher hopes so. He rails against the “small band of preservation extremists” and “arrogant elite” who supported saving the structure. His views have already spurned many comments on both sides of the issue as you could imagine. What do you think?