In response to the anonymous post I received the other day claiming there was a memo circulating detailing an effort to sell River Park to developers to build a parking garage for the new baseball stadium, sources within River Park said that suggestion is erroneous and that there is “no plan or proposal to sell of demolish River Park.” They said the memo, which was “not in any way circulated, endorsed, or drafted by the Board or Management of River Park,” was distributed by one resident who proposed “nothing more than to look into whether River Park should explore development of its ‘excess land’ (referring primarily to our giant parking lot that abuts Delaware Avenue), not whether River Park should sell itself to developers. The member’s idea was to ask whether there was a way to capitalize on this parking lot.”

As part of the urban renewal efforts in Southwest in the 1960s, Charles Goodman designed River Park, a mix of 134 townhomes and a 384-unit high-rise complex, which is located on Delaware Avenue. Sponsored by Reynolds Metals, Goodman featured aluminum prominently in his designs. The River Park co-op web site has a listing of all the units for sale. Looks like there are currently 20 high-rise units on the market. I’m highlighting a couple of the apartments for sale whose listings have good images, especially of the unique aluminum decorative panels Goodman used in the exterior design.

Here are images of another major apartment building designed by Goodman. The 35-story Houston House was built in Texas in 1963. 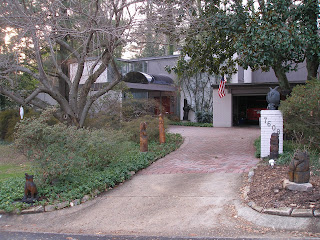 Today, Rossdhu Court in Chevy Chase is an enclave of seven modern homes built in the 1960s and ’70s. The 90 acre site used to house a castle built in 1927 by Captain and Mrs. Clarence Calhoun, according to a history of the area on the Rossdhu Gallery website. The gallery is housed in a private mid-century modern residence (pictured above) originally built for Herbert Haft. The home, which was designed by Haft’s architect brother, Leonard, was sold to the East Germany embassy in 1975 and then bought by the current owners after the fall of the Berlin Wall. They turned the home back into a private residence with a gallery space. The one remnant of the medieval-style architecture is the castle’s former gatehouse (first picture below) on Woodbine Street, which is now a private residence. 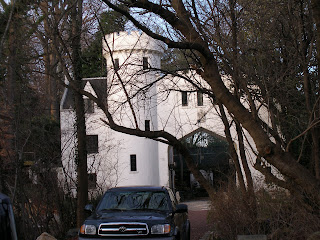 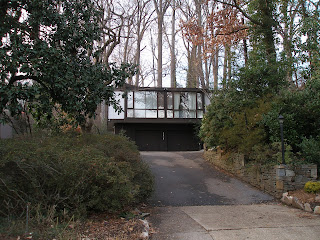 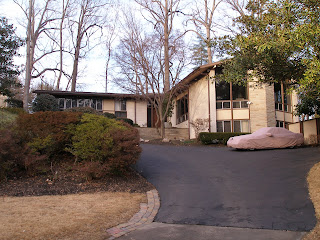 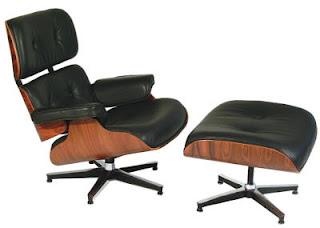 The Post‘s Housewatch columnist Katherine Salant waxes poetically about her 30-year “craving” to own an Eames lounge chair.

“The first time I sat in an Eames lounge chair, I was hooked,” she writes. “It was simply the most wonderful chair I had ever encountered, its curved and playful profile unlike anything I had ever seen. When I finished architecture school and got my first real job, I had enough money to buy either the chair and its matching ottoman or a car. Deciding that transport was the wiser choice, or at least more practical, I bought the car. But I never stopped wanting the chair.” Her quest is now over. Read her whole story.

As Southwest D.C. goes through another period of urban renewal with the revitalization of the Waterside Mall (the new area will be called the Waterfront) and the new baseball stadium, the area continues to represent one of the region’s largest concentration of mid-century modern dwellings, which were built during the first urban renewal of the 1950s and ’60s. The Redevelopment Land Agency (RLA), created by Congress in 1945, considered two proposals for the area, according to a history by the U.S. Army Corps of Engineers.

“The first, proposed by city planner Elbert Peets, called for rehabilitation of buildings and some new construction, with little long-term displacement of current residents and businesses. The second, by two of Washington’s leading modernist architects Chloethiel Woodard Smith and Louis Justement, called for demolishing the old neighborhood completely in favor of creating a modernist Utopia following the most avant-garde socially responsible architectural ideas and ideals.

“Rebuilding in a variety of architectural typologies from high-rise apartment buildings to row houses, all in extensive landscape settings would, they argued, provide better conditions for some of the former residents, but primarily would attract higher income professionals back from the suburbs. In the end, the RLA, with the approval of the District of Columbia Commissioners and the newly-reorganized National Capital Planning Commission, favored a plan based on the Smith-Justement model. Decried by many for decades as socially irresponsible because the neighborhood’s cohesion was broken and historically important buildings were lost, Southwest’s extensive Modernist landscape was again appreciated at the beginning of the twenty-first century as its open spaces were threatened by new buildings.”

This effort to create such a “modernist Utopia” led to dwellings and other buildings by leading modernist architects, including Charles Goodman (River Park), I.M. Pei, Morris Lapidus, Marcel Breuer (who designed the Robert C. Weaver Building), Harry Weese, who designed the Arena Stage building and Metro, and Keyes, Lethbridge and Condon, who designed the award-winning Tiber Island complex.

Here’s a listing (no images) for a Charles Goodman barrel-roof townhome located in River Park. Look for more posts in the coming days highlighting other MCM properties for sale in Southwest.